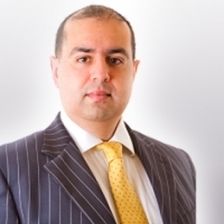 Mohammed is an experienced Solicitor and the Director of ULA Solicitors.

With over 15 years of experience in the law industry, he possesses transdisciplinary expertise in a wide range of legal services. Prior to establishing his own firm, he was associated with Christian Khan Solicitors. Being a senior equity partner of the leading human rights law firm, he contributed to the expansion of the firm's Crime, Civil Litigation and Personal Injury department profile by attracting numerous high-profile cases.

Mohammed set up ULA Solicitors in 2007 and has led the team to develop a dedicated law practice which specialises in complex and serious criminal cases, including those with an international dimension. He specialises in Crime, Civil Litigation, Debt Recovery and Personal Injury and he has defended numerous claims involving allegations of negligence, fraud and divorce. His exceptionally professional and hands-on approach to dealing with cases, enables him to represent clients with high standards and ensures his expert involvement from the beginning. Mohammed has able to obtain high compensations in Personal Injury cases.

He handles cases at every stage, from initial arrest to court advocacy, he has a natural capacity to work on-demand with efficacy. Mohammed has provided expert supervision for many years and continues to lead a professional team.
He also specialises in and provides pragmatic advice on Terrorism, Murder, Manslaughter, Large-scale conspiracies, Complex fraud, Sexual offences and Large-scale drug cases. He uses an innovative approach to handling individual cases in order to ensure that he represents his clients in the best way possible.
Mohammed tackles complex, evidence-heavy work with a meticulous and robust approach to both legal and factual issues. His tenacity ensures that cases receive detailed preparation, and that prosecution evidence is fully tested before trial, often resulting in cases or individual counts being stayed before getting to court.

Due to his immense knowledge and experience, his firm is accelerating in bringing a unique perspective to client experience.

R v R, St. Albans Crown Court
The defendant was charged with historical sexual assaults and rape allegations (over 30 years ago) in relation to his daughter and further sexual assaults against his son.

R v G, Grimsby Crown Court
Allegations of multiple rape and sexual assault spanning several yearswere made against the defendant by his wife. The defendant was found not guilty of all charges.

R v I, Snaresbrook Crown Court
The defendant was charged with possession of a firearm with intent to endanger life. It was alleged that shots were discharged at a family home with children present as retaliation for shooting at the defendants' house. On-going.

DWP v S
The case involved a benefit fraud. The case centred on whether the defendant had the requisite knowledge of the 'change in circumstances' about which the DWP said she had failed to inform them. The matter required in depth analysis of the prosecution's evidence and legal research into the legal definition of 'knowledge' as well as gathering character references and information on the defendant's child's health. As a result of lengthy representations made to the prosecution, the matter was not proceeded with.

R v A and Others, Croydon Crown Court
The Defendant was charged, together with others, with serious allegations of kidnapping, blackmail, false imprisonment, and class B drug offences. The case was complex as it was accepted by the defence that all defendants were present whilst the alleged offences took place. The issue of joint enterprise arose as it was the Crown's case that the defendants were jointly responsible for the acts by virtue of the fact that they were all present. The defendant denied the allegations and after a lengthy trial was found not guilty of the most serious charges of blackmail, kidnapping and false imprisonment.

R v P and Others, Harrow Crown Court
A multi handed case involving conspiracy to kidnap and violent disorder. The case was listed for trial. However, after the Crown had presented its case, the defence made a submission of no case to answer and this was granted by the trial judge. The defendant at the direction of the judge was found not guilty on all counts.

R v K and others, Harrow Crown Court
The defendant and several others were alleged to have conspired to commit a large scale benefit fraud spanning several years.

R v DB and Others, Isleworth Crown Court
The defendant, one of four, was charged with a complex conspiracy to handle stolen goods. He was alleged to have played a pivotal role in the sale and distribution of thousands of car parts, harvested from stolen luxury vehicles and then sold via internet sites such as E-Bay and Gumtree. A conservative estimate of the value of parts seized following police raids on the defendant's premises was in the region of £500,000. Following detailed legal submissions at the outset of the trial, key aspects of the prosecution case were ruled to be inadmissible. Consequently the Crown was compelled to offer no evidence and the defendant was acquitted.

*R v T and Others, Southwark Crown Court
Mohammed Ullah is currently instructed in a very high costs case (VHCC) to act on behalf of the first of five defendants accused of converting in excess of £130 million through a bureaux de change and a property portfolio spanning 3 continents. On-going.

R v T and Another, Central Criminal Court
Mohammed Ullah is currently instructed in a very high costs case (VHCC) to act on behalf of the first of five defendants accused of converting in excess of £130 million through a bureaux de change and a property portfolio spanning 3 continents. On-going.

R v NA and Another, Central Criminal Court
The defendant was charged with manslaughter and a further two counts of failing to discharge a duty under the Health and Safety at Work Act 1974 contrary to sections 2(1) and 3 (1) of that act. The allegations the defendant faced were novel, complex, and very serious. The prosecution relied upon lengthy and complex expert evidence. It was their case that whilst the Defendant owned and operated a business, his employee was electrocuted as a result of defects in the wiring and electrical equipment. It was therefore alleged that the defendant had breached his duty as an employer, a breach which caused the death. It was also alleged that the defendant was grossly negligent or reckless in causing the death. Evidence in relation to electrical wiring, equipment and health and safety regulations was central to the prosecution case; this evidence was challenged by the defence. Shortly before the trial the defence headed by Mohammed Ullah made representations to the Prosecution, which led to the discharge of the manslaughter charge. The defendant pleaded guilty to the two Health and Safety at Work Act charges, and after hearing mitigation on behalf of the defendant, the court imposed a suspended sentence, community penalty, and a fine.

R v S and Another, Central Criminal Court
An alleged murder where both defendants were youths. The case concerned circumstances in which a 45 year old man was stabbed to death in his own home. It was accepted by the defence that both defendants were in the deceased's flat shortly before they emerged and ran off and that he was fatally stabbed with a knife during the course of their visit. Complex issues of joint enterprise arose as it was the Crown's case that both defendants were jointly responsible for the killing. Further, issues relating to undercurrents of sexual abuse by the victim also arose. The defendant was found not guilty of murder.

R v A and Others, Middlesbrough Crown Court
A large-scale, multi-handed conspiracy to supply Class A drugs with the centre of operations in Hull and suppliers elsewhere in the UK. The defendant was the only one of the accused to be acquitted of all charges.

R v D and Others, Kingston Crown Court
A multi-million-pound international operation to supply Class A Drugs with complex money laundering issues, involving investigations and evidence gathered in several countries. The defendant was first on the indictment and alleged to be the mastermind of the drugs conspiracy.

What people have said

I have noted Mohammed's overwhelming commitment to his clients, and his determination to obtaining the best possible result for them. He is extremely hard-working and will go the extra mile. He is a talented lawyer with a client focused approach. He encourages all those who work with him to work to the best of their abilities.

Mohammed Ullah is a very experienced and competent solicitor who attends to the affairs of his clients with dedication and industry and who develops good relationships with his clients, particularly the young and disadvantaged

Mohammed Ullah has to be in the first tier of lawyers in London dealing with serious and complex crime. With enormous experience and a firm command of the law he is fearless and determined. He always puts the interests of his client first. When instructed by him you know he will demand the very best on their behalf. Mohammed Ullah has instructed me in some substantial cases including a complex criminal appeal. I was enormously impressed by his conduct of the cases I have acted for him in. He had a complete grasp of the detail of the case and an excellent rapport with his clients who obviously valued and trusted his judgement. He has shown a really good "feel" for a case and has an excellent grasp of the important points; he seems to instinctively know what points are going to be good. He is a pleasure to work with.

Mohammed Ullah is fast becoming the first choice for those charged with heavy international money laundering and fraud. The reason is quite simple, he is vastly experienced in international fiscal crime and does not take "a back seat" in the preparation of his client's case. He is "hands-on" from the outset playing the fullest part in in the preparation for trial and insists on working directly with the Silk and Junior instructed. There is no doubt that he and his firm are going to go far.