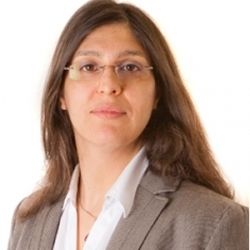 Ines is one of the senior Solicitors associated with ULA solocitors. She joined the firm in 2009 and has contributed to making it a prestigious law firm and she continues to provide top quality tailored legal advise to clients on a wide range of legal services.

Possessing extensive experience in preparing complex and evidence-heavy cases, she continues to work on cases which involve, but not limited to, international elements such as large-scale fraud, money laundering, human trafficking, drug importation, serious violent crime and sexual offence.

Ines has a conscientious approach to dealing with cases as well as a dedicated personable manner which puts her clients at ease throughout the case handling process.
Her analytical skills add to her meticulous and scrupulous manner in tackling evidence-heavy cases. She has dealt with many high-profile cases and has succeeded in representing her clients with high standards.

Ines has a natural tendency to pay attention to detail and this enables her to work efficiently to accomplish the client's goals. She continues to provide her contribution to the legal services and representing clients on daily basis.

R v D - Kingston crown court
One of the largest cases involving multi million conspiracy to import class A drug to the UK.

R v O and others - Woolwich crown court
Conspiracy to rob involving what appeared at first sight to be overwhelming evidence. The client was intercepted in the street by armed undercover officers in the company of three others. The group had been under surveillance for some days as the police were acting on intelligence that they were planning a serious armed robbery. On arrest, they were found to be carrying a knife, handcuffs and other criminal paraphernalia. The case was complicated in law and fact. However, extensive and meticulous trial preparation on behalf of the client led to his acquittal.

R v M & Others. Kingston crown court
Multi-handed conspiracy to burgle involving a significant amount of telephone and surveillance evidence. The defendants were intercepted by armed undercover officers in the company of three others. The group had been under surveillance for some time as the police acted on intelligence.
The defendants were allegedly seen driving in convoy driving stolen vehicles with false number plates. It was alleged that they were carrying out reconnaissance before attempting to burgle empty and valuable properties -Ongoing.

R v R, St Albans Crown Court
The defendant charged with historical sexual assaults against his son and the rape of his daughter. After negotiating with the prosecution the charges brought by the son were discontinued.

R v L Southwark Crown Court
The defendant was charged with Arson with intent to endanger life, after negotiation the matter was proceeded with simple Arson, which had significant ramification on sentencing powers available.